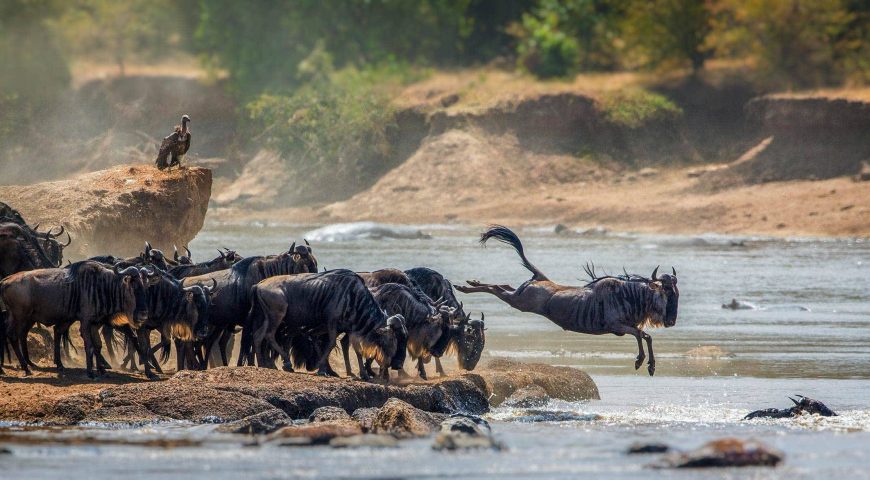 If Africa had a Big Five for safari parks, the Masai Mara safari would easily make the final cut. It’s a classic safari destination and one of the best places to see lions, leopards and cheetahs, as well as being home to iconic savannah country that long ago came to define the East African safari. It also has the Big Five (lion, leopard, elephant, buffalo and rhino), a good mix of public areas and private conservancies, and extraordinarily rich accommodation offerings.

“A word of warning: no one knows the exact moment when the herds of wildebeest and zebra, more than 2 million strong, will cross the border from Tanzania’s Serengeti National Park into Kenya and the Masai Mara. And nor can anyone predict with certainty the precise weeks when the wildebeest will funnel down the banks of and across the crocodile-infested Mara River. But there are some reasonably reliable parameters to help when choosing the time to visit in order to maximize your chances of witnessing one of the greatest wildlife spectacles on the planet. In most years, the herds arrive in the Mara around mid-July and into August. This stage is when the massed crossings of the Mara River usually occur. In September and October, the herds usually remain in the Mara, a moving mass of wildlife that is quite extraordinary to see. By late October and almost certainly by November the herds leave Kenya and return to Tanzania.”